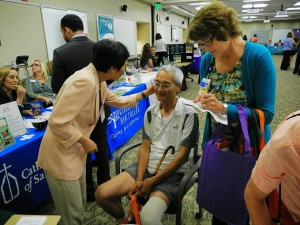 I am a licensed acupuncturist, founder and CEO of the Center for Healing by Design. I have a passion to share with the world the most revolutionary technology on the planet: the body’s unique healing system and how to activate it. My education is necessary for my practice, but what fuels my passion is my “inner design,” innate qualities that led me to my work, which I can track from my earliest memories to now.

I have great empathy for clients in pain. I was hospitalized when I was a child with a kidney infection. Hypodermic needles searched my tiny veins several times a day and left my arms and hands bruised, bloodied and swollen. When my pet chickens were to be slaughtered by my father for meat, I tried to rescue them.

I relish seeing how things work. I spent many hours as a child observing my pet chickens: egg laying, that shadow inside the egg indicating an embryo, baby chicks pecking their way out of shells without help.

I value exactness as well as my creative imagination; this helps me create fun ways of demonstrating the body’s healing design. For example, locating the body’s organs and using tools to gather precise information are vital to assessment and therapeutic intervention. But for patients to enjoy learning about their bodies’ capacity to heal, thereby increasing their self-care, they have to be engaged. That fun element was supported in my childhood by my mother, a lecturer on inorganic chemistry. She took me to the theatre and encouraged me with my dance performances. I remember her saying, “Do what is fun.” That resonates today as I connect energetically with my clients.

“…a monkey directing an elephant by pulling the elephant’s ear…”

The interrelatedness of things, like the idea of the body as a system, fascinated me. My father made up my favorite bedtime story about a monkey directing an elephant by pulling the elephant’s ear in the direction it wanted to go. I understood the ear as a guidance mechanism, and the monkey and elephant, though different, were part of the same system.

My desire to support the health of others bloomed early. I emigrated to the U.S. from China when I was 10, and by middle school, I was visiting patients in nursing homes through an American Red Cross program. A hospital internship during high school showed me that healthcare felt right; the sight of blood did not. I focused on technology since I enjoyed seeing how things worked. I became a user interface designer for a global technology company in Silicon Valley after college. Increasing the ease of use for consumers was gratifying.

Ten years later, I connected with the part of me that wanted to relieve pain and help heal. I got a call that my friend had been in a car accident, which crushed his collarbone and ribs. I was unsure if he would recover when I visited him at El Camino Hospital in Mountain View, California, but hospital staff expressed great care and empathy toward him and supported me when I visited him. They gave me hope; I could give him care and empathy, too! I volunteered at the hospital as a way of thanking the staff for their support.

A year later, I set a goal and made a plan to become a licensed acupuncturist, which meant I would have to deal with my fear of needles. In fact, the need to find an alternative to the use of needles drove my research. I studied different reflexology modalities and developed an effective 3-step method to do acupuncture without needles, yet still activating the body’s self-healing power. I modeled the steps with user-friendly language such as “dashboards,” “warning lights” and “control panels,” the familiar language of technology.

Later, I joined the international medical team of Tzu Chi, a non-profit similar to the American Red Cross, and worked with individuals and organizations. El Camino Hospital, a hospital known for its technological advances, invited me to work there providing acupressure to their employees.

“…a half dozen entrepreneurs…pulled on their ear lobes… like children…”

My global vision was nurtured by my early emigration to the U.S., and from extensive travels in Africa, Australia, the Caribbean, Mexico and Europe. I see the world and its cultures as connected; what I offer is useful worldwide. Engagement and ease of access are key features to my work, and not only for those with pain.

I recently attended a tradeshow where entrepreneurs celebrated their latest inventions. When others asked me about my work, I demonstrated it. Hours later, a half dozen entrepreneurs stood around me experiencing the wonder of the ear, one of the body’s many control panels for activating self-healing. They pulled on their ear lobes, stroked the soft part at the top, traced the ridges with their fingers, and peered at one another’s ears like children exploring new toys with friends.